Many people don’t realize that the Army uses real Soldiers for our commercials.  Anyone who appears on TV in an Army uniform is a real Solder and not an actor.  We hold casting calls just like any other commercial.  If a Soldier is selected he/she is depicted in a job they actually do in the Army.   Same is true for any video that we produce and show on our website.  Here is a recent Story about one of the Soldiers we selected. 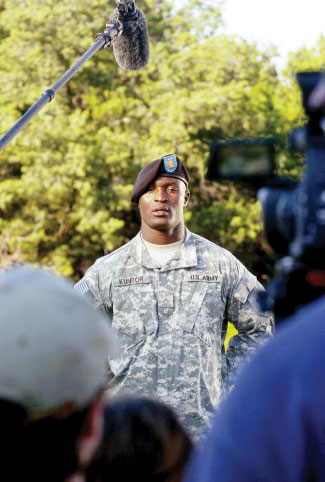 Pvt. Christopher Kuntor joined the Army eight months ago. The 25-year-old soldier is from Ghana, a country in West Africa, and it was his dream to be an American soldier. Not just an American soldier, but 11 Bravo — an infantryman.

This week, Kuntor and about 125 of his fellow 3rd Brigade Combat Team, 1st Infantry Division soldiers are starring and helping to produce a series of “Army Strong” commercials that are being shot at Fort Hood and in Austin. The commercials are set to air starting in January 2008.

Advertisers are also on post to shoot photos for recruitment posters and produce videos of the soldiers-turned-stars for www.goarmy.com.

Scrolling the road is a typical task for an infantryman, Shaver said.

About 300 of the brigade’s soldiers auditioned for the commercial series, which also includes print ads, in August. They were asked why they chose their military occupational specialty, why they joined the Army and whether their families were supportive of those decisions.

Several of the soldiers said they had no idea why they were chosen. Allen was selected “because of my good looks,” he said with a mischievous smile.

He thinks he stood out because of his combat experience — the 24-year-old Hawaiian has deployed to Iraq twice.
“I feel good to get to be in it,” he said.

Shaver, a 20-year-old from Peoria, Ill., was supposed to be in the field on Monday instead of hanging out under a catering tent in a training area, feasting on roast beef, salmon, mashed potatoes and asparagus. He likes going to the field, but the food at the commercial shoot was a lot better, he said.

His unit sent him to audition last month and he just did what he was told, he said.

“Army Strong, man, Army Strong,” he said when chided by Allen and Kuntor.

Kuntor was sent to audition for the commercial because “my first sergeant thinks I’m high speed,” he joked.

“Yeah, I think so,” he said with a confident smile.

He, Allen and Shaver were proud they were chosen to represent infantrymen in the brigade. Kuntor told the advertising agency representatives who auditioned him that infantrymen are the front line — they carry the whole Army.

Kuntor has been in the United States since 2003 and wanted to be in the Army because it was the best and most disciplined in the entire world.

“Being a soldier is not just a choice; it’s a real privilege,” he said.

“We die for freedom. Freedom is not cheap, you know — it’s priceless.”

Kuntor was raised in a warrior culture in Ghana, trained to be a fighter, he said. The Army and the infantry seemed a natural fit for him. When he returns home, he is regarded as a hero, he said.

“I’m like the son who left to get bread and came back with bread and butter,” he said.

The most important thing is that the commercials represent the Army — real soldiers and equipment they would interact with. Army officials want males 18-24 years of age to envision themselves in Kuntor’s or Allen’s or Shaver’s combat boots.

Its goal is to showcase the personalities of the soldier and demonstrate how the Army made them stronger, said Edward Walt, deputy assistant secretary of the Army. It is also important the commercials portray the realism of what somebody in that age group is able to do — be a young person and really take over some of those leadership roles, he said.

Walt was stationed at Fort Hood from 1993 to 1996 as a military intelligence officer. He was back in the field on Monday, but this time he was relaxing in a director’s chair under a tent.

He was able to recognize some areas of Fort Hood, but he said Killeen has changed much in the last 10 years.

Fort Hood and the brigade were chosen after the Army’s Accessions Command picked the post because it had the terrain and training areas officials wanted. Installation officials chose the brigade, Lee said, based on the soldiers’ availability.

Sgt. Catherine Butterfield, of Charlie Company, Special Troops Battalion, was the star of a scene on Monday afternoon where she and a group of body armor-clad, weapons-toting soldiers were trying to acquire a satellite signal on a piece of equipment called a SMART-T, a Secure, Mobile, Anti-jam, Reliable, Tactical Terminal.

The 24-year-old never thought she would be starring in a commercial just two months after arriving at Fort Hood. She thought she’d arrive on post, train and deploy.

“It’s pretty cool,” she said of the unexpected experience.

She has talked about the commercials with her 3-year-old son and he has declared that his “mommy is a rock star.”

The camera has a tendency to make people nervous, said Suzanne Nagel, program manager for www.goarmy.com. She chose some of the soldiers who will appear in the commercials for a soldier-perspective feature on the Web site. She interviewed them on-camera, asking the kind of things they discussed in the auditions.

Some of the soldiers were nervous standing by themselves in front of Nagel, the camera, a sound man and several other crew members, she said, and some were naturals.

Kuntor was one of those chosen for the Web interview. Wearing his beret and with a Humvee in the background, he flashed his wide smile and answered Nagel’s questions.

Earlier, in the shade of the catering tent, Kuntor, Allen and Shaver talked about the best part of being soldiers — the camaraderie. Allen has gotten to meet people from across the United States and across the world — something he might not have experienced had he stayed in Hawaii, he said.

“I would never have met somebody from Africa,” he said, reaching across the table and slapping hands with Kuntor.