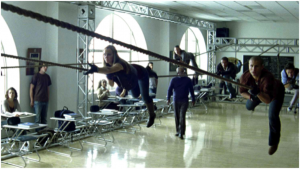 Scene from Army Strong, "Strength Like No Other" Television Commercial

The Army is launching three new nationally televised advertisements on Veterans Day (tomorrow) with the theme “Strength like no other.”

The new ads are part of a campaign that will further extend the Army Strong brand. The campaign will eventually include four 30-second ads and a 60-second “anthem” spot that will air on ESPN, MTV and the Speed channel.

The campaign includes an NFL salute to the troops, actually produced by the National Football League, that began airing during Sunday’s network games. The campaign will include 10 “influencer” TV spots that focus on parents, and it will also include a number of special features on the GoArmy.com Web page.

The three ads that will begin airing Nov. 11 are titled: Team, School, and Company. “Team” will underscore the benefits of working on a team made up of heroes like no other.

“School” will illustrate the only classroom in the world where someone will learn technology, strength and leadership skills all in one day, marketing officials said. The ad is actually filmed at the University of California, Los Angeles and one shot portrays students negotiating four rope obstacles that span across a classroom.

“Company” will feature business leaders that began their careers in the Army. It will depict their military service filled with career opportunities and respect, Walters said.

A fourth 30-second ad, “Garage,” will begin airing in early January and will show what it would be like to work in a garage that teaches everything from technology of robotics to working on jet engines.

The 60-second “anthem” spot will feature a variety of military occupational specialties to include an Army astronaut and a member of the 3rd U.S. Infantry, known as the “Old Guard.” The underlying theme of the spot will be the Soldiers Creed.

Each TV spot will drive people to the GoArmy.com Web site. He explained that the site will be enhanced with Web films featuring Soldiers sharing their unique experiences going through basic training and living on an Army installation. There will also be an interactive feature in which Web browsers can ask Soldiers questions.

The Army understands that today’s future Soldiers live online, and an important part of our new campaign is to drive these interested people to GoArmy.com to experience the Army through the voices of our Soldiers. There is no better testament to what someone can achieve through the Army than our brave men and women already in uniform.

Real Army Soldiers were screen-tested for the new round of advertising to lend an authentic feel to the spots. In fact, two Soldiers have speaking roles in “Garage.”

Additional advertising as part of the campaign is expected later in the year and in early 2009.