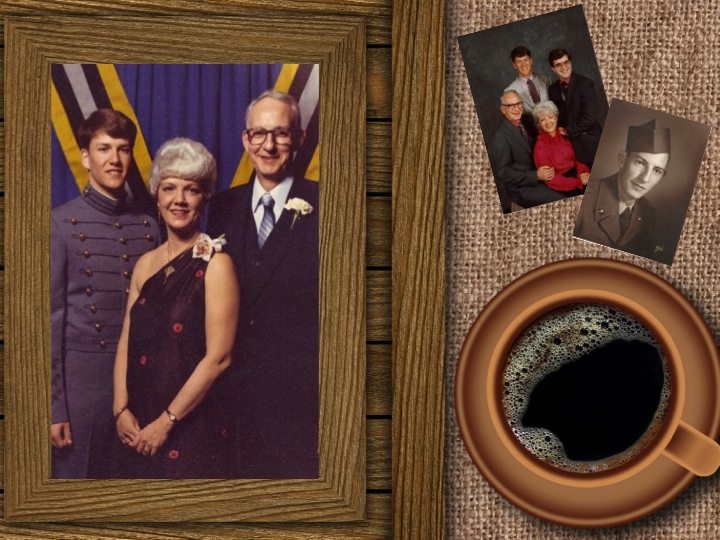 Yesterday as I stood by my father’s grave on Memorial Day I thought about many things.  I thought about all the good times I shared with my father.  I thought of the support he gave me as I served in uniform even though his experience in the Army in the early 1950s was very different from mine.  You see, Dad didn’t really think much about the Army.  Over the years I have thought how much my Army experience has taught me about Leadership and Values.  Unfortunately it wasn’t until Dad passed away that I reflected on the foundation my father helped create for the Army to expand.  The following is a summary of ideas I discussed at his eulogy in April 2009.  As you read this I ask you to consider, what foundation are you building?

Loyalty – Dad demonstrated loyalty in many ways.  He had professional loyalty working at Carrier for 35 years before he retired.  He was loyal to his children; we always knew that Dad was there when we needed.  One time when I was diagnosed with a kidney disease Dad flew out to California to be by my side.  When Phil decided to buy the house that he now lives in, it was Dad who helped him with the purchase and to repaint much of the inside.  Nothing can demonstrate loyalty like the life he shared with Mom.  They knew each other for over 61 years and were married for 56.  The very last words Dad said was at 3:30 am when the hospital was getting ready to insert a breathing tube were, “please don’t call Joanie, she is sick and needs her sleep, there is no need for her to worry.”

Duty – My father, like his father before him, was called to serve in the Army.  I learned through many stories shared at the kitchen table of the places Dad saw and the experiences he had.  He did his duty to his country, though having recently married Mom if was not his choice.  Despite this, Dad choose to focus on the positive side of every experience.  Dad was an example that you should enjoy what you do, no matter the situation.  He carried this on in his personal life.  He took his duties as a husband and father seriously and taught us to not walk away from our responsibilities.

Respect – In his entire life I barely ever heard him say a disparaging word about someone else; it took a great deal for Dad not to respect someone.  As a result, he was respected by many.  While I was growing up and even more so as I attended West Point I heard stories from my Dad of a West Point Captain who he served with as his company clerk.  This captain did not demonstrate respect for his subordinates.  I remember a story Dad once told where this captain demanded a mouse trap for his office from the supply sergeant even after being told there were none available in the supply system.  They were stationed on an old World War II German installation with underground caverns and so the supply sergeant, with Dad’s help, managed to catch a wild cat to set loose in the captain’s office.  As I was being commissioned in the Army, my Dad looked at me and said, “Don’t you ever become a Captain Valaster.”  Despite the ribbons on my uniform and the awards I have received over the years, my greatest accomplishment was my father telling me he was ‘proud of me’.  Dad was not one to just throw around compliments which made those words even more meaningful.

Selfless Service – Dad was always there to help anyone who needed it. As a kid I can remember him helping a neighbor build a patio deck off the back of their house.  He spent hours designing and helping to build it simply because they were his friends.  He was my little league coach and he helped me when I was in the boy scouts.  Dad would go on camping trips with me even though they didn’t make sleeping bags for men who were 6’3”.  Rather than complain, Dad made jokes about it.  In the final years, if you ever came to the house for dinner, you’d find that despite all the pain, Dad wanted to do the dishes.  I’d try to offer and help so he could have a day off and the best I could get was to leave a few for him to finish.

Honor and Integrity – Dad always did what was right no matter who was around.  As a young boy I found a coin purse in a men’s room.  There wasn’t much money in it but he encouraged me to find a way to return it to its owner.   Years later as a cadet I was with Mom and Dad at a movie theater and I was given a dollar extra in change and I went back and returned it.  Dad made a comment about what West Point had taught me, but I told him I had learned that before I ever came to the school.

Personal Courage – Over 10 years before his death, Dad was told that he would probably have 3-5 years to live.  He was a fighter who lived every day to the fullest.  He had his tough days but he tried not to share his pain with others.  When he would grimace and you’d ask if he was hurting he’d say “just a tad.”  Dad always maintained his sense of humor.  The last conversation I had with him was 2 nights before he passed away.  We talked for a little while and he said “I better go, there are two nurses in my room and I think they want to get their hands on me.”

Dad has not died but passed on to another life.  I believe that he is now in a place where he can continue to help me and guide me in my life’s decisions…and for that I am very grateful.

Every parent dreams that their child will accomplish more than them.  Mom and Dad pushed me to get a college education.  They supported my decision to attend West Point even though they had their own reservations about me serving in uniform.  I have had some very amazing assignments and my career has been very successful, but I still have a long way to go until I can claim to be the person my Dad was.  Our family and friends have lost a great man, but I believe heaven is a brighter place, with a little more laughter, than it was before he arrived.

If you want to honor my Dad, stop and introduce yourself to someone new or help someone or laugh just a little more at yourself.  Cherish life, so those around you will smile when they think about you.  That is all my Dad would ask for if he were here today.

What lessons in leadership did you learn from your family?