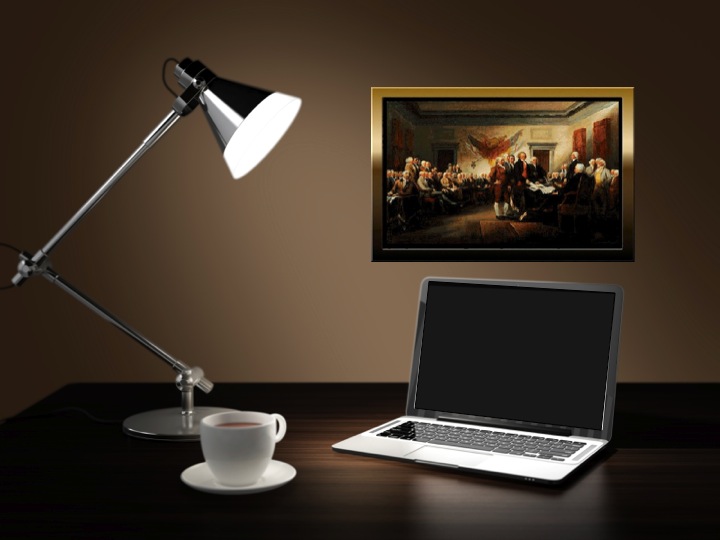 As we celebrate the 4th of July many remember it as the day of our country’s independence but the combination of my years as a Soldier, a lover of history and most recently a continuous student of marketing I view it in a very different way…I see this as the anniversary of one of the greatest social media campaigns!

History of the Declaration

The Revolutionary War was fought from 1775-1783.  The Constitution wasn’t adopted until September 17th, 1787, and yet we celebrate the date of the Declaration of Independence as the day of our independence rather than the date the war ended.  Why?  We celebrate a great idea.    Lets look at that idea from a marketing perspective to see what we can learn.

The idea for independence was nothing new.  Thomas Paine published the first edition of Common Sense on January 10, 1776.  Within six months approximately 250,000 copies had been sold.  Considering the population at that time was two and a half million people that means that 10% of the population owned a copy of the book and even more had probably read it or had it read to them by the time the Continental Congress would gather to discuss the subject.

On July 2nd the Continental Congress voted to declare independence from Great Britain.  However, this idea (product) would go nowhere until it was “sold” to the colonists (consumers).    The congress appointed Thomas Jefferson as the writer (agency) of the declaration.  John Adams and Benjamin Franklin (the marketing team) assisted Jefferson (by developing the marketing strategy and communication plan).  It is important to note that this was part of a bigger (business) plan.  The Continental Army had been created on June 14, 1775.  The purpose of the declaration was to achieve four objectives (call to action):

Once the declaration was developed it went to the Continental Congress (focus group) for review and approval.  After the document was signed they produced several copies to be distributed and read throughout the colonies to generate discussion and acceptance of these ideas by the colonists (social media campaign).  Copies were also provided to the King and other foreign governments.  We all know the end result.

What are the lessons for today?

1. Social media is media. Although many of the tools are free that doesn’t mean there is no cost.  There is a labor cost to maintain it and just like the signers of the declaration risked their lives, a company with a poor use of social media risks alienating people and potentially losing business.

2.  Remember your marketing plan must support your business plan. The Declaration of Independence was a tool to help achieve bigger objectives.  It was about more than just gaining “friends and followers,” it was about getting people to take action.  This action ranged from not providing information to the British to joining the Continental Army.  For foreign governments it meant providing money or weapons.  Success was

4.  Understand your audience. The Continental Congress had representatives from each of the colonies.  In listening to the debates that took place prior to the July 2nd vote to declare independence Jefferson, Adams and Franklin learned how to develop a message that would be accepted throughout the colonies.  A company should invest money into social media research much like traditional advertising.  You need to know which tools your audience are using and for what purpose.  You also need to understand what types of messages they want on which tools.  Do you know the demographics for the audiences using Facebook, Twitter, YouTube, LinkedIn, etc.?  Do you know the optimum time(s) for posting your message on these tools in order to generate the most discussion?  Why more agencies aren’t providing this service baffles me.

5.  Have a crisis reaction plan in place. Dominoes, Intel, and P&G are a few examples of how quickly protests can arise against your brand using social media.  As part of your communication plan you need to determine how you will (or maybe won’t) respond to the negative things that will be said about your brand. This includes your own sites and others as well.

6. Social media is about generating a discussion. Read that again…a discussion, a two way dialogue where you can learn from customers and provide additional, useful information.  Where the discussion takes place is irrelevant.

Enjoy your celebration of our independence and as you do, ask yourself one question…is my social media campaign worthy of a celebration?

Any other good examples of social media you can think of that don’t involve Twitter, Facebook and the other current tools?