In honor of Veterans Day later this week and with the continued reports on Veterans Unemployment I will publish eleven articles on why to hire a veteran.  Why eleven?  Maybe you need to understand the history of Veterans Day.

In an Army that has fought two wars simultaneously while also doing peacekeeping operations around the world flexibility is a key to success.  In 2005 General Peter Schoomaker, then Army Chief of Staff, referred to Soldiers as being Pentatheletes.  Capable of learning new skills at an accelerated pace and adapting quickly to their environment.  The diagram below includes in the Army Posture Statement, the Secretary of the Army and Chief’s official testimony to Congress.  Soldiers can’t be good at one task; they are proficient at several. 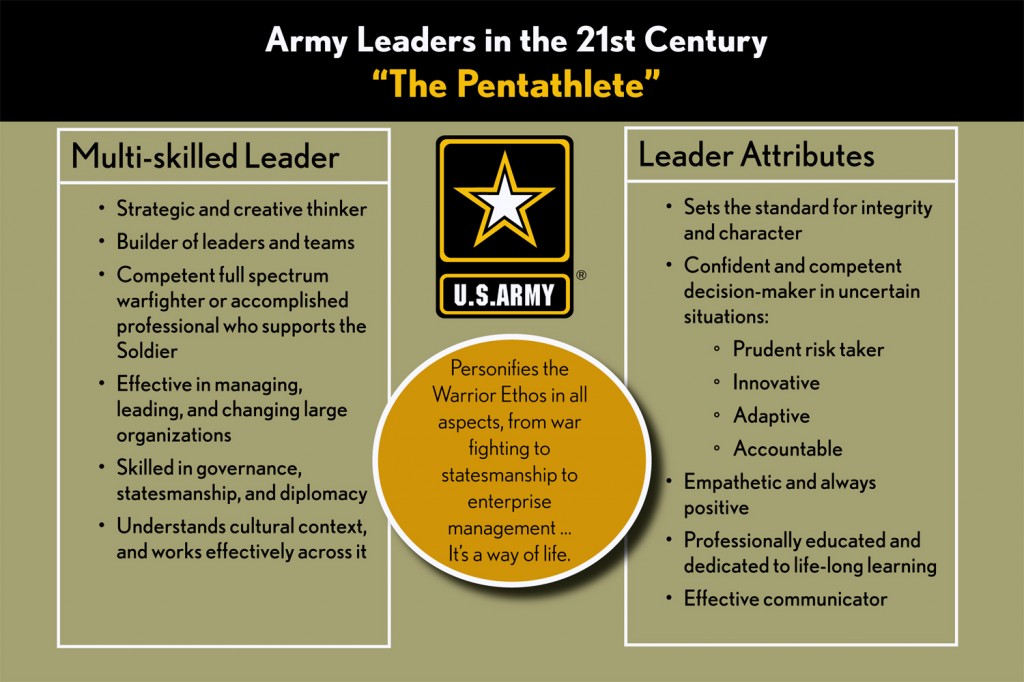 Senior Officers with fifteen or more years of experience have found themselves mastering many skills that are important to any company.  As a leader deployed around the world they are a master strategist and tactician, a statesman capable of negotiating with others from other cultures and able to adapt and respond to every crisis.  In addition to leadership, time management and process improvement they are able to adapt off the battlefield to other assignments that include staff work in the Pentagon, instructors at college campuses or the United States Military Academy.  Although the military provides a great amount of training, most of these leaders have self-development programs that have added to their skill set.

Junior Military Officers (Lieutenants and Captains) find themselves moving from position to position mastering new skills for each.  It is not uncommon for an officer with 4-5 years of operational experience to have lead a unit of 30 Soldiers, been in charge of logistics and maintenance and have experience working on a staff.  In addition to their daily leadership duties they also have “additional duties” that include being the unit maintenance officer, unit tax officer, etc.

Non-Commisioned Officers are the backbone of our military.  Unlike any other military around the world, our NCOs are empowered to make decisions based on guidance from their boss.  They are responsible for the day-to-day health and welfare of Soldiers in their unit and the maintenance and accountability of their equipment.

If you are looking for someone capable of learning and adapting quickly, Hire a Veteran.