With a troubled economy, a still high unemployment rate and the stress of the holidays is it just possible that Klout is a contributing factor to holiday depression?  Let me explain why I ask…

As I was enjoying a morning cup of coffee and reading through my Twitter stream I noticed that Klout was getting lots of comments, and most were not very positive.  I went and looked at my Klout score.  The results for the last week were rather interesting.  My score was relatively constant between 51-52 until this morning when it dropped to 50.  Today’s drop seemed to be in line with what others were experiencing but to a lesser degree.  What caught my eye though was the little movement earlier in the week.  On Monday night I was a guest on a Twitter chat and I received far more mentions and retweets than a typical day and yet my score didn’t indicate it, not so much as a minor jump.  I see Klout as a tool, but not one I have placed much weight in from a score perspective.  Unfortunately  many do. 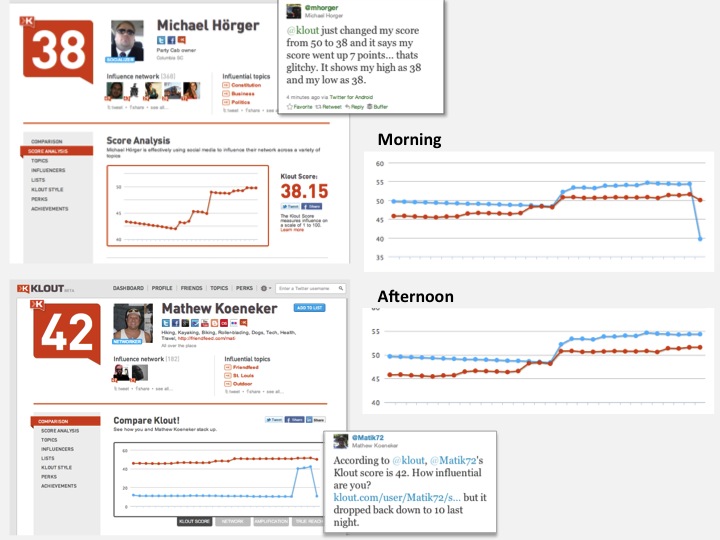 Next I looked at some examples from those who were commenting.  There were reports of numbers and graphs not matching (Left side of picture).  In one case as you can see above for 3 days someones score went from 10 to 42 and returned to 10 this morning when everyone else began complaining about a problem with their score.  Looking at this persons account I cannot figure out how they rate a 42.  He seems to have a small number of followers/friends and not a great deal of activity.  As the day progressed the problem seemed to resolve itself.  The graphs on the right show early morning information and early afternoon results.  What puzzles me is the drastic difference between two accounts.  What caused only a slight drop in my score and such a drastic change in others?

Why do algorithm changes seem to have no impact on Klout?

With all the ups and downs in sentiment towards Klout I thought I would look at how I compare with them.  This graph is from early this morning, note the downward turn of my score (red) just like above.  Why was there no change to Klout’s score?

One valuable lesson here is that Klout does not measure sentiment.  A few minutes watching the stream for comments about Klout reveals a large mix of positive and negative and yet their score remains flatlined and I imagine will stay that way for the next week.  Don’t worry, I’ll be watching.

Lessons for Klout and other companies.

Numbers Matter to People.  Many Klout users are attached to their score.  Human psychology plays a factor in tools like this.  Some people work hard to increase their Klout score and any change in a negative direction is taken to heart.  I believe that someone at Klout recognized this when they developed their color schemes.  Negative arrows being blue rather than red, which is a typical color for negative.  In an unscientific poll I asked people after the last Klout change if they would have been less upset if their score remained unchanged and Klout and increased the max score up from 100.  Everyone agreed this would have been a better change and would have probably happened with little mention.

Klout Uses.  Since Klout does not reveal how they compute their scores it should trouble people when things like today point out that changes don’t impact everyones score equally.  In September 2011 and November 2011 articles were published talking about including Klout scores on resumes.  I hope that this points out that it still isn’t clear what Klout really measures or how it measures it.  It clearly doesn’t measure someones ability to develop strategy or positive vs. negative sentiment.

Does Klout Contribute to Holiday Depression?

Although the title is something of a joke, there were many comments from people talking about how hard they work to increase their score.  Klout and other companies must fully evaluate the impact change will have on those using their service.  Failure can result in a loss of members and damage to their brand.  It is much easier to damage your reputation than it is to repair it.  This should demonstrate the need for testing and to include users in your change management process.