Under my direction the most drastic change the Army made was to shift more resources into digital since that was where research showed the prospects were getting the majority of their information.  The website was redesigned to meet the expectation of the users by using more personalized Soldier videos and moving into social media to generate dialogue. 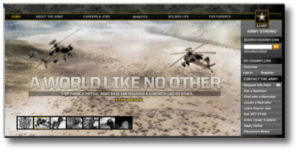 In an effort to help educate visitors to our website about life in the Army we built a 3D animation to help transport visitors through and across a virtual base in an immersive, full motion journey, combining life-like graphics with hotspots linked to live action webisodes in an effort to enhance the realism and depth of the online experience.

Each hotspot identifies the on-base location of key members of the Army team, from Special Forces and field artillery to military police and astronauts, while the corresponding live action pieces provide the back story and support explaining their crucial roles in the Army.

These transitions through the animated base and into the webisode locations are the key components to the site’s cutting-edge multi-sensory action and showcase the future of integrated online experiences.

A World like No Other was featured on Ad Critic’s Top Five, received a One Show Merit Award as well as an honorable mention from The Adobe Max Awards.

Click here to see a video example or visit on GoArmy.com

What Else We Should Have Done: We had already begun production of the virtual world when I realized the potential that could exist to make this an interactive portal for the rest of our website as well as an educational tool to help people gain a better understanding of what is on a military base.

The Army developed a YAHOO Instant Message Skin that was the #1 download and drove hundreds of thousands of people to our website during a 4 month period.  As a result a new skin was launched in 2009 with similar results, the new skin including a game that could be played during the chat session.  This was our first big step in being in the social space beyond a static MySpace page.

The Army enters into Social Media

In 2007 new recruit surveys indicated that more and more people were joining the Army who already knew someone who was or had served.  Focus groups indicated that those without this experience were misinformed on military service.  Other research revealed that most prospects didn’t trust the information on our website and as a result would look elsewhere to validate the information we provided.  The research also revealed that they relied on peer recommendations/endorsements and found user generated content to be more authentic than marketing materials developed by the Army and companies.  During my travels it became apparent that after a discussion with people about the truth of service their opinion changed.  It seemed logical to leverage social media as a way to provide our prospects with a way to validate our messaging with real Soldiers, people they could see as their peers. 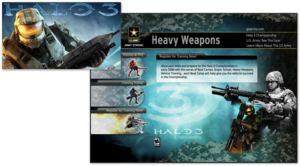 The marketing program was linked with one of our prospects passions…gaming.  The partnership with HALO 3 broke all previous sponsorship/interactive records on the Xbox Live platform and was awarded a 2009 Effie Award.

In addition, we integrated the launch of America’s Army 3 into our recruiting marketing efforts for FY09.  The Army produces this game to give prospects, and others, an opportunity to learn about the Army in a virtual reality.  We integrated the marketing of the new version of this game across our marketing campaign.

This paint scheme was featured July 11th, 2009 at the Lifelock.com 400 at Chicagoland Speedway.

One thought on “Digital and Social Media”