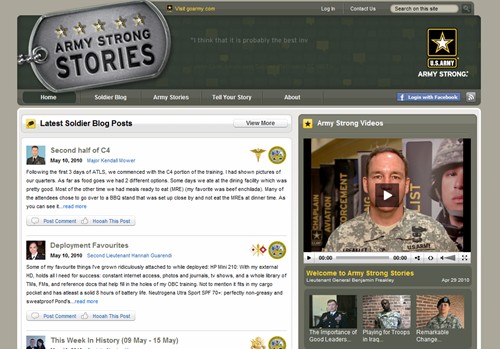 In 2008 the Army launched Army Strong Stories.  The concept was part of our social media strategy with the intent of letting real Soldiers tell their story.  This would give people a chance to see a day in the life of Soldiers from different career fields.  When we launched the website there were less than 20 contributors.   By 2011 it has grown to over 600.

In an effort to simplify the process Soldiers email in their post to the Army’s public relations team who then post it to the site.  None of the posts are edited.  In the time I was the Director of Marketing we made one correction, a spelling error, and that was done with the approval of the author.  We developed a Twitter and YouTube account to help let people know that new stories are published.

At the time we began this program, blogging was frowned upon in the Army.  We were challenged with getting Soldiers to participate because they were concerned it would adversely affect their career.   Gaining the reassurance of senior Army leaders, our first group broke ground for others to follow.  As more Soldiers learned of the program and saw how it was being used, the list of contributors began to grow.

Traffic increased 650% in 2nd year resulting over 33,000 visits per month. Program has been highlighted as an effective tactic in several publications.  Awarded Bronze Sabre Award.