This program was an overwhelming success, exceeding all expectations and breaking all known sponsorship/interactive records on the XboxLive platform.  Third party research also showed significant movement in perception, consideration and willingness to take action.

Halo 3 is the #1 selling game for Xbox, XboxLive, and the #1 First Person Shooter game.  Beyond its popularity within the gaming community, the Halo franchise is part of pop culture with nearly all 13-30 year olds having either played, seen or heard of it. Halo also has spawned a book franchise that is a best-seller and is in pre-production for its first movie.

A testament to the broad appeal of this franchise is Halo 3’s record as the biggest entertainment launch in history, surpassing “Spiderman 3” and “Harry Potter and the Deathly Hallows” within the first day of release. Pre-sales were greater than what “Spiderman 3” pulled in its first week, which at the time was an all-time movie record.

U.S.  Army was the exclusive “Official Sponsor Of” the Halo 3 Tournament on the XboxLive platform. There are only 6 official XboxLive Tournaments per year, and this was the largest and most successful effort in the history of XboxLive – surpassing all other events combined.

At its most fundamental, the U.S.  Army’s sponsorship consisted of the rights to sponsor a Branded Destination Experience (BDE) on the Halo 3 XboxLive platform.  The aggressiveness of our negotiation culminated in significant “firsts” for a sponsor on XboxLive.  That, combined with the resounding success of this partnership has allowed our sponsorship to extend beyond the XboxLive platform to social media, online advertising, digital video, print, public relations and ultimately potentially to broadcast and live events…the details of much of which are still being finalized in partnership with Microsoft and Bungie (the game developer).   It is the first truly multi-platform effort of its kind.

In more specific terms, this sponsorship consists of the following:

Blade Presence:
Upon arrival to XboxLive platform, pre-registered XboxLive community of gamers have the opportunity to click on the link that would allow them to access their game of choice.  For Halo 3, the game is represented by a co-branded Army/Halo image. All gamers are represented by an “icon” that portrays them to other players, along with their XboxLive player name.

XboxLive also has a marketplace where gamers can purchase content, tips and trips and other XboxLive merchandise.  In addition to a presence on the entry blade, there is a co-branded Army/Halo image on the Marketplace blade.

Either of these links takes you to the BDE experience where you can register for the Halo 3 Championship tournament, get tips and tricks, and download “cool” imagery and content for brand advertisers. 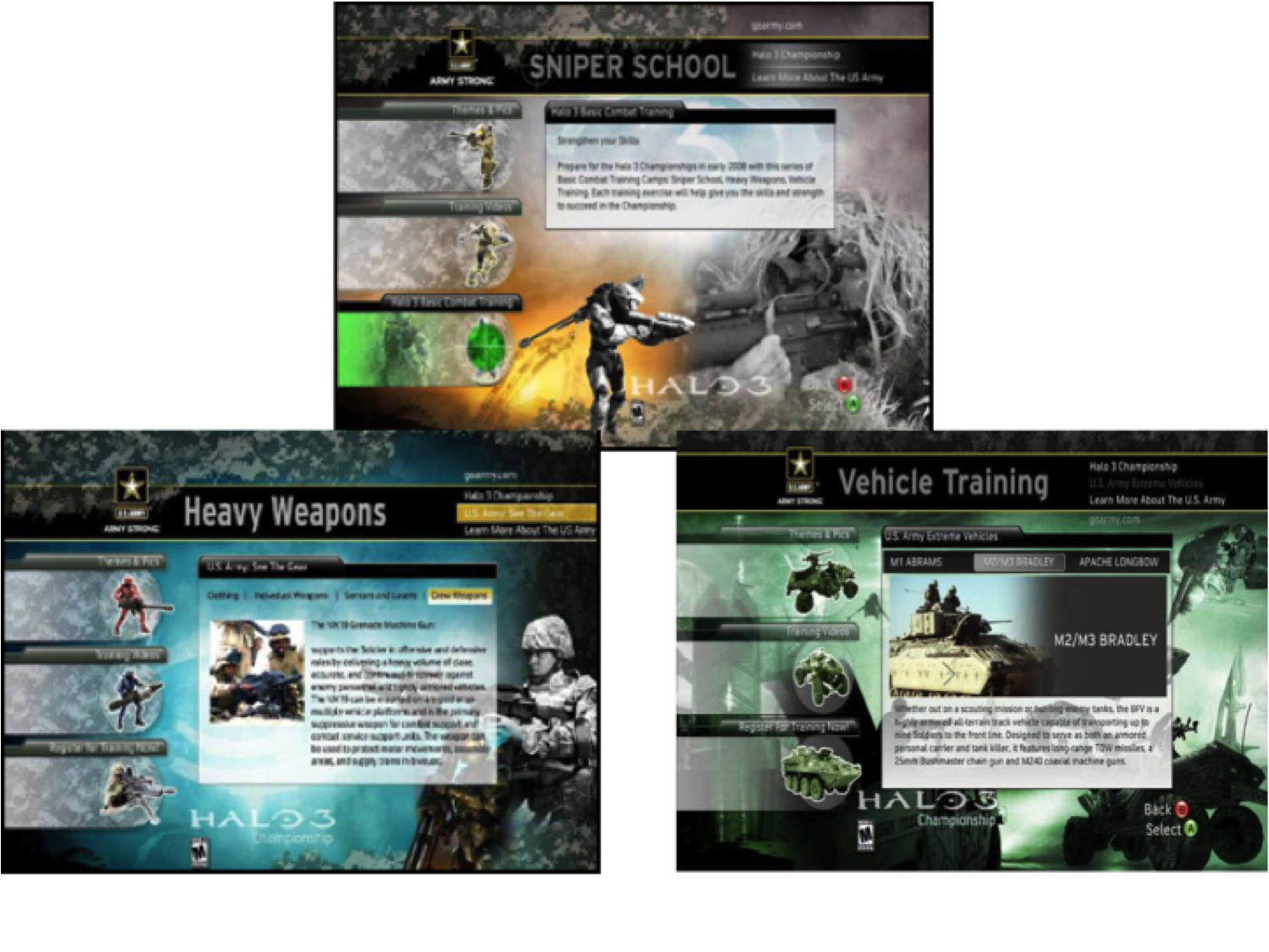 Branded Destination Experience platform with three releases: Sniper School, Vehicle Training and Heavy Weapons.  Sponsorships of this type typically manifest themselves with a mere sponsor logo in the corner of a static and standard XboxLive background and limited presence elsewhere on the XboxLive site.  MWG negotiated the ability to alter our presence on the BDE.  Therefore the Army/Halo 3 creative and subsequent presence is quite different from anything else on the XboxLive site.

Within these BDEs, players have the opportunity to practice their technique, download identifying icons, download sponsor content, and gain “tips and tricks” that will help them succeed.

In addition, every BDE has at least one Army web video (repurposed from the web videos to promote integration of messaging) that viewers can view or download.  “Theme Paks” can also be accessed from the BDE that incorporate Army iconography to represent your virtual self (i.e., images, army logo).

–        MLG (Major League Gaming) partnered with us as part of the sponsorship to produce live demos of how to play Halo 3 brought to you by the U.S.  Army.  The Army is frequently mentioned in the video as well as branded throughout.

–        Training provided by one of the lead gamers in the country – a former US Army Sniper – who acknowledges the Army throughout – both by providing the experience but also helping to drive to goarmy.com with a call to action.