Why Straight From Iraq?

On Veteran’s Day in 2008 we launched an updated version of our website.  Part of this included a section called Straight From Iraq.  It began by identifying the program and soliciting viewers to submit questions.  The questions were sent to Iraq where Soldiers with handheld cameras would record responses.  Samples of those responses can be seen at the bottom of this page.  The agency initially wanted to send a film crew to Iraq, to either do the program live or to film in a studio.  Based on research about our prospects that indicated they found user generated content more authentic I decided we would not use a film crew.  This would also allow us to film more responses.  The other benefit of recording the responses was that it provided a reason for us to engage with the person who submitted the question and would bring them back to our website.  When they posted their question we asked for their email address in order to let them know when their response was posted on our website. 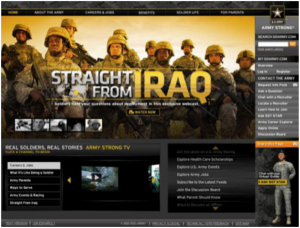 The U.S. Army and its agency MRM Worldwide McCann Worldgroup won Gold in September 2009 at the prestigious Jay Chiat Awards for the strategic excellence of its online program, “Straight from Iraq.” The Jay Chiat Awards, established in 2003, are sponsored by the American Association of Advertising Agencies.

In awarding this honor, the judges singled out the idea, content, execution and tangible results in the Army’s ability to achieve its marketing objective of familiarizing prospects about deployment in the Middle East and enabling them to engage directly with real Soldiers in theater. This program, in conjunction with the Army’s larger marketing efforts, helped the U.S. Army meet its recruiting goals in FY09.

“We’ve spent a lot of time making sure we know what’s on young people’s minds these days and being where they are in the social media space. We’ve found that many of the barriers to consideration exist because there simply has been no dialogue,” said Lt. Gen Benjamin C. Freakley, Commanding General of U.S. Army Accessions Command. “As America’s Army, we know how important it is to stay connected to our young men and women. They crave conversations that are real and transparent. ‘Straight From Iraq’ was as real as it gets.”

“Straight From Iraq” picked up the Gold for the “Idea for New Product or New Content” category, which selects the best strategic thinking that led to the development of a new product, service or content idea.

The Jay Chiat Planning Awards are given out each year in recognition of marketing campaigns that have a strong insight about the consumer and a well-honed strategy that guides the creative execution to solve a business challenge.

In developing “Straight from Iraq,” the Army’s marketing and research teams were able to surmount one of the most important barriers to Army enlistment among 17 to 24-year-olds-deployment in Iraq. No topic was off limits. Prospects could ask what it was like to take cover while an M1 Abrams tank fired on an insurgent hideout or inquire about the overall quality of food served in the dining facility.

Samples of the Responses