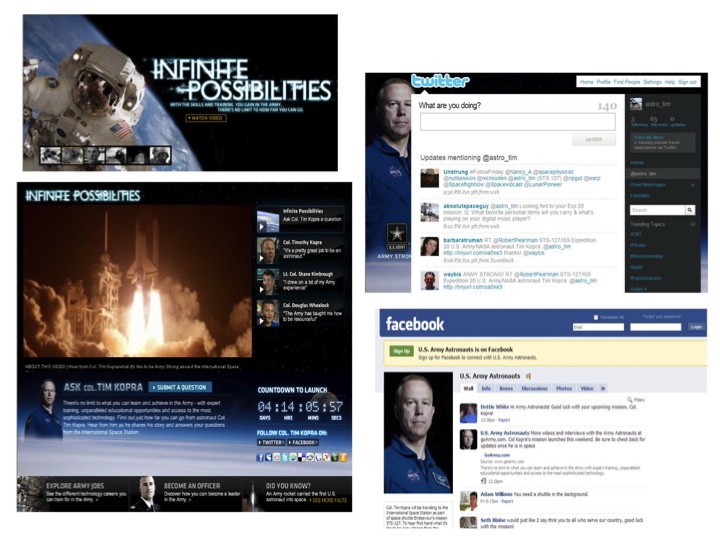 Army Strong on Earth and Beyond

This program began by the meeting of two West Point classmates.  During the 2009 Army All American Bowl I had the opportunity to meet Army Astronaut Tim Kopra.  Tim had been featured in a TV commercial we produced in 2008 but this was the first time we met.  While we talked we realized we were classmates.  As the conversation continued Tim mentioned he would be heading to the International Space Station.  We continued talking and realized that we could help each other while helping the Army at the same time. 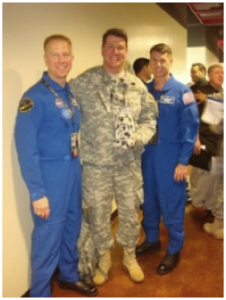 As a kid I had a fascination with space, ok, everyone in my generation had a fascination with space.  The more Tim spoke about his experiences the more similarities I saw with opportunities in the Army.  From flight and language training to underwater training and robotics, all of these opportunities were available to Soldiers too.  Who wouldn’t want to listen to an astronaut?  Even with the Space Shuttle it still is a very elite club.  Through his stories we could help dispel some of the myths that influencers had about service in the Army.  NOTE: Yes, I am holding a stuffed dog.  That is Spot who my son gave me to keep me company as I traveled all over the world.

At first there was resistance over the idea.  Comments like “We don’t recruit astronauts” or “There are only four of them” were reasons why people didn’t think this was a strong idea.  However, many quickly began to realize that Tim and his counterparts were our celebrities.  While some companies pay celebrity spokespeople we had some in our own ranks!  When I told the agency I was going ahead with the ideas, with or without them, they quickly jumped on board.

The use of the Army astronauts helped generate almost 500 television news stories across the country.  Here is an example of one of these stories:

One other example of low cost promotion was our use of a T-shirt that I provided to Tim and another West Point Astronaut for use in an Army-Navy spirit video that was used in the broadcast of the game.

What we could have done better

I had asked out advertising agency to work with Twitter on an announcement on the 1st tweet from space, they didn’t.  Ironically, in 2011 for their 5th year anniversary Twitter listed this as one of their accomplishments.  Additionally, since I was leaving as the program began, I was disappointed that more wasn’t done to promote the social aspects of this campaign.

Tim was scheduled to return to space as part of the final space shuttle mission in 2011.  Unfortunately Tim was injured in a bike accident and did not get that chance.