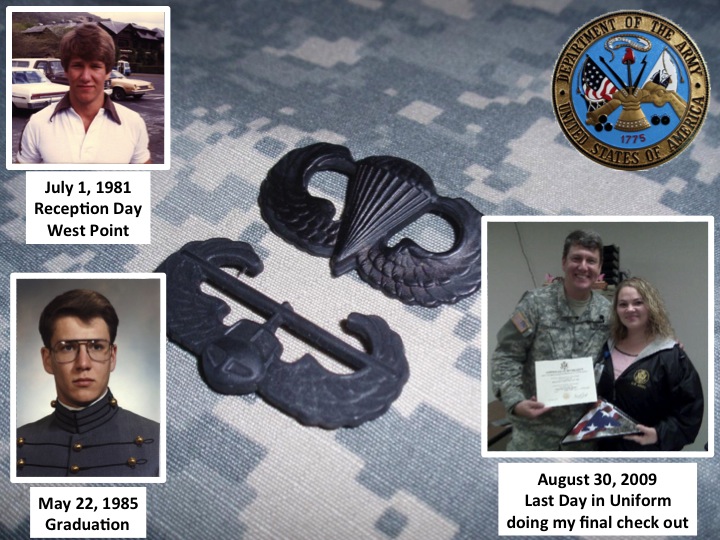 Having served in the US Army for 24 years there were numerous opportunities for me to develop leadership skills, through personal experiences and through working with other great leaders.  Through blog posts I plan to share some of the lessons I learned throughout my career.  The following is a summary of my experience in the Army.

US Army Director of Marketing

Although I do not have a career filled with marketing titles I brought years of strategic planning experience.  Early in my preparation for the position I read two books that gave me direction.

First, Marketing Warfare by Al Ries and Jack Trout.  The book identified many similarities between marketing and the military.  One of the challenges with our program was the lack of a good, detailed planning process.  Strategy development and planning are my strengths.  I turned to a process I had worked on for the Army that developed a detailed process for Fire Support Planning.  Using this process we were able to improve integration, improve efficiencies and clearly articulate tasks and metrics. 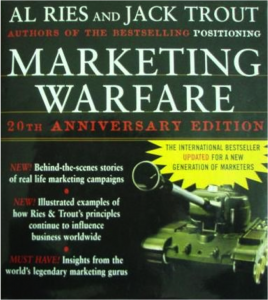 Second, The New Rules of PR and Marketing by David Meerman Scott.  David’s book highlighted the ability of social media to help connect consumers and brands and provide a tool for them to have a discussion.  Based on research about the campaign it was clear to me that we needed people to learn the truth about military service so they could make an informed decision about joining. 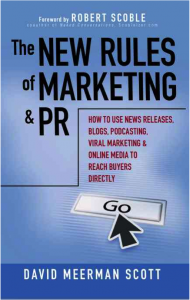 More about the campaign can be found in the Army Strong Campaign section. 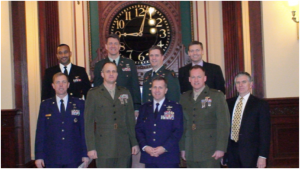 The Secretary of Defense Corporate Fellows Program (SDCFP) was created in 1995 by Secretary William Perry and still continues to serve as a key part of the Department of Defense (DoD) transformation effort.  Each service selects two officers considered to have potential for continued service within the military.  These officers receive credit for attending a senior service college. After selection, they begin a month long training program that focuses on short-term preparation for their assignment within Corporate America and long-term development for their military careers.  This training includes a series of briefings from distinguished leaders from within government to include Congressman, members of the media, business executives and former members of the program.  The training concludes with an executive MBA program conducted by the University of Virginia’s Darden Business School.

Upon completion of the training program, the officers report to their assigned companies.  These companies are selected based on their ability to professionally develop an officer as well as provide observations that could aid the DoD transformation effort.  Past participants include ABB, Boeing, CNN, Caterpillar, Cisco, Citicorp, DirecTV, DuPont, Federal Express, Human Genome Sciences, Merck, Mobil, Northrop Grumman, Oracle, PricewaterhouseCoopers, Raytheon, Sun, Sears, 3M, United Technologies Corporation.  Sponsors in 2006 included Caterpillar, Inc. (Peoria, Illinois), Duetsche Bank AG (London England), E. I. du Pont de Nemours & Company (Richmond, Virginia), General Dynamics C4 Systems (Scottsdale, Arizona), IBM Business Consulting Services (Fairfax, Virginia), McKinsey & Company, Inc. (Irvine, California), Microsoft Corporation (Washington, D.C.), and Pfizer, Inc. (New York, New York).  As part of the program, the officers and their sponsors travel to each participating company to learn about the other organizations.  This last year, the members of the fellowship have had the opportunity to meet with numerous key leaders across these companies, to include discussions with four Chief Executive Officers.  The fellowship concludes with a series of briefings to key leaders, up to the Deputy Secretary of Defense, throughout the Pentagon.  The knowledge and experiences gained by these officers will benefit DoD throughout their careers.

Upon arrival at DuPont, assigned me the task of developing a crisis response business plan.  This request was a result of examination of the after action reviews from support during Hurricane Katrina.  DuPont wanted to investigate ways to improve speed and quality of response in the midst of a national crisis.  In an age of terrorist threats, chemical spills, large scale disaster relief due to major storms, and fears of a pandemic caused by Avian Influenza, the research has shown the reality exists that a crisis requiring DuPont’s expertise will occur in the near future.  As illustrated in the previous chapter, DuPont has a long history of supporting national causes.  In keeping with this tradition, DuPont is striving to set the standard for crisis response.

From my research paper provided to DuPont: As shown by the recovery efforts of Hurricane Katrina, time is of the essence in response to a crisis.  The mission is to get the proper equipment into the proper hands in the shortest amount of time.  All of this must be ready to take place in a moment’s notice, with variable factors and unknown requirements.  At first glance, the simplest way to be ready is to stockpile inventory in a public company.  Unfortunately, this solution, while basic, is not the best investment in the interest of the stockholders.  Therefore, the project became developing courses of action that would afford the company the quickest response time with the least investment in inventory and a means to market this to potential customers. 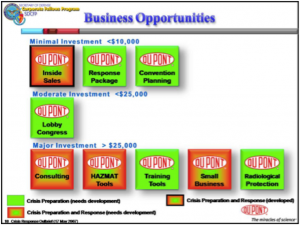 The work involved collaboration with many members of DuPont’s team including production, sales, legal and marketing. 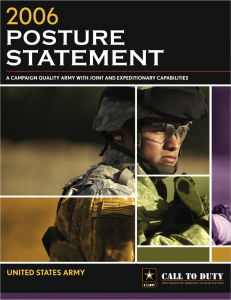 I served as a Strategic Planner for the Secretary of the Army and Chief of Staff, Army as part of their Strategic Communications Planning Group.  In this position I had a chance to work with members of Congress and their staff in an effort to help improve communications from the US Army.  One element of that was publication of the Army Posture Statement which is a document presented to Congress after the State of the Union and prior to the Secretary’s testimony to Congress.

This was a great opportunity to work with Army senior leaders and members of Congress.

Opportunities to be a Commander 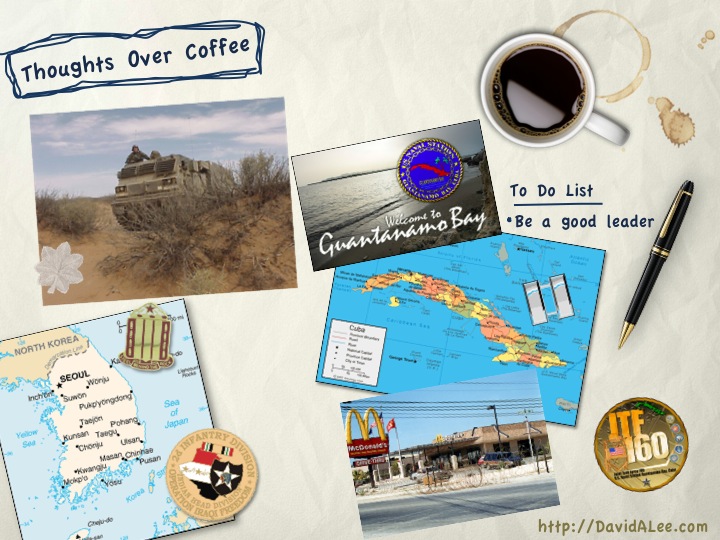 I have had the pleasure of commanding (leading) two different units.  I commanded a battery of 100 Soldiers that was based in Fort Sill, Oklahoma and a battalion of 625 Soldiers in the Republic of Korea.

1-38 FA is a Multiple Launch Rocket System (MLRS) battalion.  It consisted of over 150 combat vehicles and 625 Soldiers.  During the time I commanded the battalion I did a lot of fun things.  We had several live fire training exercises (see below) and we ran a major deployment exercise.  My time in Korea allowed me to travel to China and Thailand which really gave me insight into other cultures. 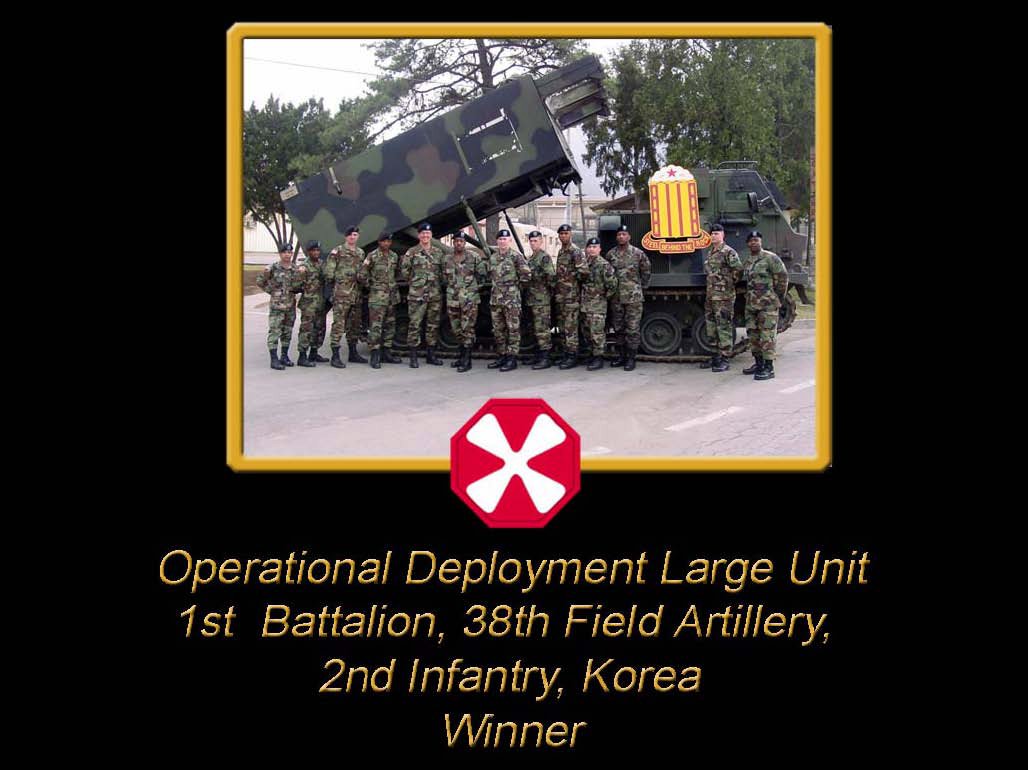 Responsible for the planning, coordination and execution of movement of over 1300 pieces of equipment via convoy, rail, ship and air in support of Operation Iraqi Freedom. Also responsible for the movement of over 5000 Soldiers from the Republic of Korea to Kuwait. This was the largest movement of U.S. personnel from Korea since the end of the Korean War and was completed with no injuries and required us to develop all procedures. Lessons learned were documented and shared to develop a Korea Theater Deployment Standing Operating Procedure.

The following video is a nice demo of a live fire that was conducted by the battalion I lead.

I lead a battery of 100 Soldiers.  Shortly after taking command the unit deployed to the National Training Center for a major training exercise.  The unit at that time was a headquarters unit.  We provided support for the operations element of the battalion.  However, later that year the battalion was given a mission to deploy to Guantanamo Bay Cuba to run refugee camps.  In order to support the mission I had to take some Soldiers from the battery and Soldiers from another battery and retrain them.

Read this about Operation Sea Signal

Life as an Operations Officer

Throughout my career I served in several operations positions.  In those positions I planned and executed numerous training and real world missions.  For two years I served as an instructor in the Field Artillery school and this opportunity provided me a chance to think more about how to do great planning.  It was these experiences that gave me the skills to run the Army Strong program!

Serving in the Army provided me an opportunity to attend some great schools.  In addition to attending academic universities I have had the ability to attend Airborne School to learn how to jump from airplanes and Air Assault School where I learned to repeal from helicopters and to rig equipment to be airlifted. 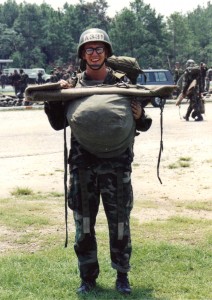 What can companies learn from the US Army?

EVERY Soldier, no matter the rank, goes to school before they arrive at their first unit.  To be clear, I’m not recommending that companies create a basic training atmosphere.  What I am recommending is that companies develop an orientation program for new hires.  If you ask any Soldier to recite the Army values they will use the acronym LDRSHIP to tell you: 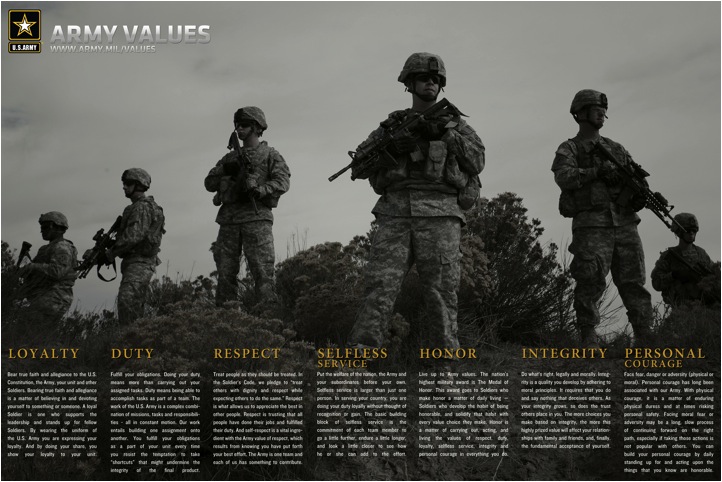 Do the employees at your organization know the company values?