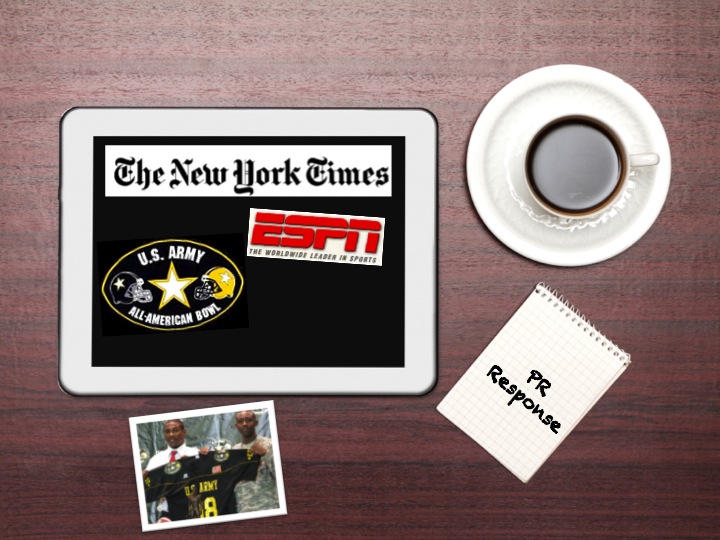 I was quoted in the following New York Times article recently.  Although I don’t know the impact ESPN will have on our game I do believe that the competition will get us more publicity this year and as a result may attract more viewers.

On Jan. 5, two high school postseason games will be played, each intended to show off a passel of future college football stars. NBC will broadcast the U.S. Army All-American Bowl at 1 p.m., to be followed an hour later by the Under Armour High School All-American Game on ABC.

The Army version is in its eighth year, having brought Reggie Bush, Vince Young, Brady Quinn and Tim Tebow to a national audience. Last year, that audience was 1.8 million viewers, not much less than the 2.3 million who tuned in to the MPC Computers Bowl, ESPN’s least-watched bowl game.

The Under Armour game is new; it was created by ESPNU, ESPN’s college television spawn, which initially named the game for itself.

“For the average fan, this might be a bonanza,” said Jason Hickman, the executive editor of MaxPreps.com, which covers high school sports. He is watching both mainly to hear which colleges the remaining uncommitted players are going to. “But I’d think both would benefit by being on separate days.

The sudden appearance of a copycat game at almost the same time did not prompt the folks at SportsLink, the organizer of the Army game, to cheer, cheer, cheer for Old Bristol U.

“We felt a bit sandbagged,” Doug Berman, the SportsLink chairman, said in an interview.

Berman said he learned of the new game in the spring when players reported about ESPN’s solicitations of them. Then, an article in gatorcountry.com quoted an ESPN recruiting coordinator, Craig Haubert, as thanking the Army for letting him “check everything out” at the Army game’s site, the Alamo Bowl in San Antonio.

“If there’s another game out there on the same day, we’re not going to knock heads with anybody, but this is the best time for us to do what we’ve got to do,” Haubert said.

That sentiment led Berman in June to write to Robert A. Iger, the chairman of Disney, which is the parent of ESPN and ABC. He held the Army to a higher standard as a sponsor and scorned the cable giant’s “unpatriotic undertaking” merely for the sake of staging a game. He described ESPN’s “attempt to undercut” the Army game as an “effort to undermine our Army.”

Pretty strong words. And maybe a little too potent for the Army.

Col. David Lee of the Army Accessions Command, which oversees the sponsorship, said that by serving in uniform, “we believe in freedom of choice, so we welcome the competition.” He would not predict if ESPN would dilute the Army’s message, which is not to recruit the players in the game, but to educate students, teenage viewers and their parents.

“We use this as we use Nascar, the N.H.R.A., and the Essence Music Festival,” Lee said by telephone. “It’s to tell America what the Army is like.”

Berman is calmer now. He said that 74 of the 84 players selected to play in the Army game accepted. But he is still peeved at ESPN’s actions, which, to some degree, amount to staging a game against one sponsored by the Army, which spends a considerable sum on ESPN programming.

“Do I think they used their leverage to create a viable bowl game because it gives them three hours of airtime? Yes,” said Berman, who was the campaign chairman for Senator Bill Bradley’s 2000 presidential run. “Do I think in their mix of bowl games this is more critical than anything else? No.” He added: “But would I rather not be competing with ESPN? Yes.”

David Berson, an executive vice president of ESPN, said that the time conflict between the games was “not something we were looking for and we’ll work together to minimize it going forward.”

Berson played down the rivalry between the games (“There isn’t a real business here,” he said), promoted the idea that there are enough players to stock two good games, and said that its look-alike game is an extension of its interest in high school sports. But, no, it’s not about building a subempire.

If I were Berman and the Army, I’d be frightened about the new game.

ESPN knows how to build franchises. Rather than be allied with Yahoo-owned Rivals.com, as the Army game is, ESPN owns Scouts Inc., which guided its player selections. ESPN insulated itself from criticism that it is trampling on the armed forces by bringing in the Marines as a sponsor.

ESPN’s game is a far more impressive presence on espn.com than the Army’s game is on usarmyallamericanbowl.com. This is a battle the Army could lose.

And while the Army’s game-related activities include a selection tour that takes it to all the players’ high schools (as well as to those chosen for the Army All American Marching Band), ESPN carries the allure of being a highlight on “SportsCenter,” the likelihood that ESPN will follow you through the career you’re hoping for, and kind words from Lee Corso.