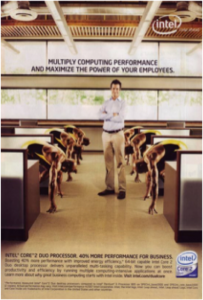 This is the first Marketing Idea post because we currently work with McCann who developed this.  The Intel team from McCann works on the floor above the Army account.  Although Intel is taking the heat for this McCann is quietly slipping under the radar.  I understand the old Harry Truman statement of “The Buck Stops Here” but having worked with McCann now through the creative process and other areas for the last 6 months I have seen the oversized egos of creatives and account executives.  This ad should have been vetted by the agency and never shown to Intel.  Unless someone in Intel directed the creative, I am disappointed that McCann is allowing their client to take all the heat on this one.  I’m sure that the concern McCann has over losing this account is well justified and firing a few people is not the salvation….step up and take responsibility…it will earn them respect in the end.

Intel is a great marketing organization.   I have been watching them since 2006 when I was working with DuPont.

THE ALMIGHTY Chipzilla has come under some fire for what some ad experts are suggesting is a rather inadvertently racist Core Duo advert.

The ad, which can be seen here, shows a white IT manager looking pretty pleased with himself, having successful managed to “multiply computing performance” and “maximise the power” of his employees.

Here’s the downer: for some bizarre reason, the employees are all depicted as black athletes, crouched as if starting a sprint race – but also appearing to all bow down before the smug white dude.
Public response to the controversy seems to range from “Stupid ad but not racism” and “Not even a little bit racist. At worst, stereotypical. At best a completely crap ad”, through to “This one is a shit storm waiting to happen. You could say it’s racist for so many reasons.”

Whilst we don’t suggest for a second that anybody at Intel is racist, it is slightly strange that this one got through MarComms without anybody pointing out the potential problem. Is everyone asleep over in San Jose?

Update  Intel, it seems recognized its folly, but a tad too late. Nancy Bhagat Vice president, director of Integrated Marketing at the chip maker writes of the ad in her blog, here: “We have used the visual of sprinters in the past successfully. Unfortunately, our execution did not deliver our intended message and in fact proved to be insensitive and insulting. Upon recognizing this, we attempted to pull the ad from all publications but, unfortunately, we failed on one last media placement.”

3 thoughts on “Intel under fire for ‘racist’ ad”

Leave a Reply to D Nor Cancel reply