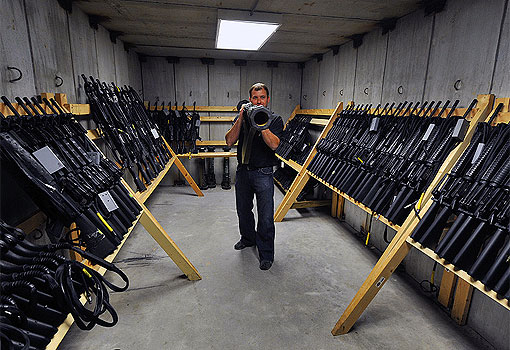 U.S. Army NASCAR driver Ryan Newman and crew members participated in a “greening” process Monday (Jan. 12) at Fort Bragg, home of the 82nd Airborne Division and the U.S. Army’s Special Operations Command. The visit gave Newman and the team a glimpse into the strength of the Army Strong Soldier.

Not only did Newman and the No. 39 crew from the Stewart-Haas Racing organization enjoy each of the stops, they actually took part in firing weapons and experiencing the free fall simulator in the vertical wind tunnel, which is part of the U.S. Army John F. Kennedy Special Warfare Center and School.

“No question, we all left Fort Bragg even more impressed with the technology and training of the U.S. Army,” said Newman. “It was an amazing experience to get a back-stage type of tour. And to fire those incredible weapons was awesome. Probably the coolest thing we did was fly in the free fall simulator wind tunnel. It’s going to be an honor and a privilege to represent our Soldiers as the driver of the U.S. Army Chevrolet Impala SS this year.”

Newman, an avid outdoorsman, was overwhelmed with the weapon technology, especially the M107 50-caliber long-range sniper rifle, which can engage a target up to 26 football fields (yes, 26). The 31-year-old South Bend, Ind. native and reigning Daytona 500 champion had a marksmanship quality with the M107, scoring an impressive number of target hits.

“It was a thrill to pump some lead with the big weapons,” offered Newman.

“In racing we stress speed, power, technology and teamwork,” Newman added. “It’s the same in the U.S. Army. That’s one of the really neat things about having the Army as a partner.”