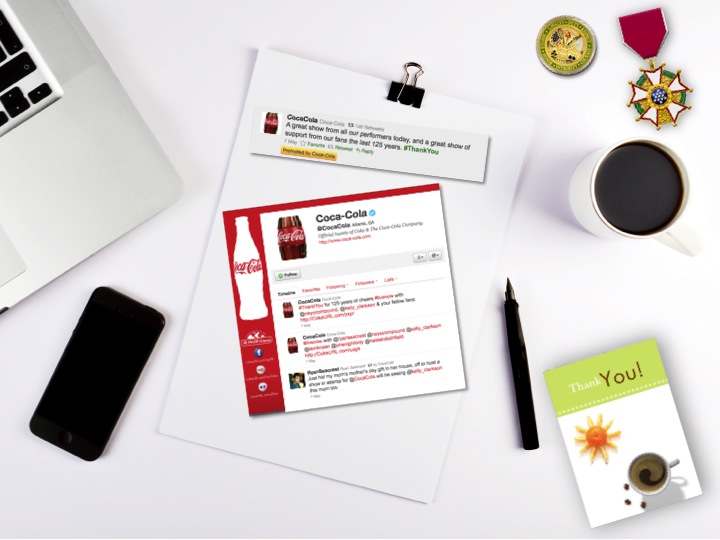 A soldier will fight long and hard for a bit of colored ribbon.

On Saturday as I was preparing to present a session at Minnebar, I noticed that #ThankYou was trending on Twitter. I was thrilled to see it. In my humble opinion, I don’t think people say thank you enough. Unfortunately Coca-Cola had to pay and #ThankYou was actually a promoted tweet, that leads us into today’s post…

Saying thank you has been a part of my life since I was a little kid. This carried over to my own kids as well. Even before they could speak, we taught them baby signs in order to communicate and one of those words was “Thank You.” I say thank you all day long, but each time with just as much sincerity as the time before.

First, it makes people feel better. In 2006 I was part of a fellowship program. One of my peers who worked at another company told the rest of us a story about having said thank you. Someone had done something simple to help him as he was getting on board and later in the day he went to this persons office and said thank you. The person looked at him and said, “I’ve worked here for 16 years and you are the first person to say thank you to me.” WOW

Second, negative news travel further and faster than positive news. Just think about the stories you read or watch. How rapidly do positive stories travel in comparison to those that are negative? How about in your life? If your boss complements you do you tell as many people as if he scolds you? How likely are you to tweet about a positive customer service experience versus one that is negative? Now translate that into dealing with people. How many times does someone need to hear a positive comment to overcome a negative experience? Do you want to be known as someone who is positive or negative?

Third, saying thank you can demonstrate you don’t take people for granted. I am amazed by the number of self proclaimed gurus and experts who engage in social media and are unable to say thank you, even when they ask someone to engage with them. I saw a CMO of a large retail company tweet he was looking for comments on his blog to help him with something he was working on. He received over 20 comments but he didn’t post any response, not even a generic thank you to all who participated. Saying thank you can be a way to acknowledge that someone has done something you could not have done yourself and will more likely get someone to help you again.

Leaders should set the example for others by continuously showing their gratitude for the work others do each day.  Remember, if your employees are happy that will show to your customers.  A positive attitude within an organization can achieve great results.

There are simple ways to say thank you:

1. Say thanks as soon as someone does something for you. My last words at every retail location where someone has served me are “Thank you, have a great day.” Think of it as paying it forward for the person behind you.
2. Offer a token of your appreciation. In the military we hand out coins to recognize those who have done something above and beyond the typical daily duty. We also award certificates of appreciation which are given in a more formal environment than coins typically are presented. For those who do even more we award them a series of medals, some of which can be offered as an “impact” award. This means it bypasses the typical approval process. These are far less frequent than coins because of the level of the person who controls the award.
3. Consider the value of an immediate response versus a more formal presentation in front of peers.

I hope that in the future #ThankYou or #TY becomes a trend without a company like Coca-Cola having to pay to make it happen!

What’s your most memorable experience with someone saying thank you for something you did?  Why do you think #ThankYou doesn’t trend on its own?

2 thoughts on “3 Reasons to say Thank You Every Day!”